An international conference, sponsored by the DFG, the Max-Weber-Kolleg, and the University of Erfurt, titled Killing Christians, Christians Killing: Violence, Trauma, and Identity in early Christianity, was held from July 14–16 at the Augustinerkloster in Erfurt. Organized by Prof. Katharina Waldner and Dr. Jennifer Otto, the conference aimed to challenge both popular and academic stereotypes of early Christians as predominantly the victims of persecution. Participants were invited to explore texts that depict Christians as both victims and perpetrators of violence, as well as sympathizers and unwitting beneficiaries of structurally violent systems, and as individuals and communities that grappled with ethical dilemmas and struggled to determine the legitimacy of violent actions undertaken for salutary ends. 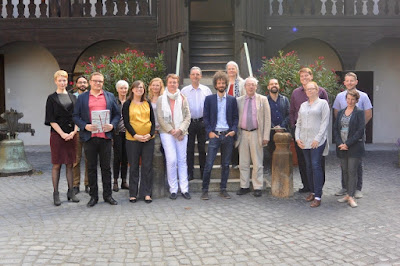 The discussion was opened by Dirk Rohmann (University of Sheffield), whose paper “Attitudes on Violence in the Roman Empire: Between Pagan and Christian Worlds” provided a valuable overview of relevant texts and terminology from the late Roman period. Papers by Markus Vinzent (King’s College London/Max-Weber-Kolleg Erfurt), pointing out the 'killing of friends' (Justin Martyr), and Eve-Marie Becker (Aarhus University) read early Christian narratives in light of the trauma of the Bar Kochba War and the Jewish Revolt, respectively. Sigurvin Larus Jonsson (Aarhus University) proceeded with an interpretation of James 5:6 (“You have condemned and murdered to righteous one, who does not resist you”) as a reflection of the widely-circulated traditions of the martyrdom of James. In their papers, “Origen and the Ethics of Execution” and “A Violent Salvation: Stigma, Discipline, and Masculinity in the Teachings of Silvanus,” Jennifer Otto (Universität Erfurt) and Blossom Stefaniw (Martin-Luther-Universität Halle) highlighted early Christian apologies for benevolent/disciplinary violence. Emiliano Urciuoli (Max-Weber-Kolleg, Erfurt) challenged the easy elision of the concepts of martyrdom and sacrifice in scholarship on early Christianity. Katharina Waldner (Universität Erfurt) introduced trauma studies as a conceptual lens for interpreting Eusebius’s The Martyrs of Palestine, while Gianna Zipp (Universität Mainz) outlined Lactantius’s rhetoricized depiction of persecution in his De mortibus persecurotum.  A final session, titled “Politics, Power, and Violence in Late Antiquity” included papers from Elizabeth De Palma Digeser (University of California at Santa Barbara) on the effects of collusion during persecution on communities of survivors, by Mark Edwards (Oxford University) on Constantine’s use of religious violence, and by Jamie Wood (University of Lincoln) on the integration of Christian ritual into military training handbooks of late antiquity.


The organizers look forward to publishing the results of the conference as a volume in the series Studia Patristica (Peeters, Leuven) in 2018.
Posted by Unknown at 19:17