In this paper I analyse  the first chapter of Meister Eckharts ›Auslegung des Buches Genesis‹. I show how the systematic thinking of Meister Eckhart, which is introduced in the first part of his latin work, is fundamental for the understanding of his entire work. The dynamic relation is more important than the any absolute principal. And only through the consideration of the relation can love and deficiency be understood. The focus in this paper is the first chapter of the ›Auslegung des Buches Genesis‹. Eckhart explains the structure of thinking parallel to the formation of the universe.
Posted by Unknown at 13:38 No comments:

Martin Christ is going to present a working paper on 'Dying, death and commemoration in early modern Zürich, Munich and Dresden, c. 1550-1650'

Different Christian confessions had different approaches to dying, death and commemoration. This project focuses on three major European centres which followed different religions: Reformed Zürich, Lutheran Dresden and Catholic Munich. In Catholicism, dying was highly ritualized and included a procession to the house of the dying, holy water and incense. Purgatory played an important role for the deceased and their family, as did saints and masses which eased a soul’s way into heaven. In Lutheranism, theologians removed many rituals and questioned their salvific powers. Saintly intercession and purgatory no longer played a role. But some elements, like bell ringing, were retained. In Calvinism, changes were even more far ranging and funeral services largely revolved around sermons, and theologians removed elements kept in Lutheranism. Calvinists no longer used funeral sermons, hymns and elaborate monuments.
This project argues that these changes have to be seen not only in a religious context, but also by investigating other political, cultural and societal changes. By analyzing, for example, how political alliances and connections influenced dying, death and commemoration, the project integrates religious change into a broader framework. Dying is a particularly valuable testing ground for the impact of such connections, because death was one of the areas of early modern life that was most profoundly influenced by the European Reformations. In this way, the project integrates death in German cities into European and global networks.
Posted by Unknown at 13:30 No comments:

My first contribution focuses on the “contradicton” in the title of my project. It introduces the problem of moral justificaton by retelling its dominant narrative and strategies. In the second half the text highlights some problematic implications and consequences of these strategies and proposes an alternative approach to the problem of moral justificaton and its narrative.
Posted by Unknown at 13:25 No comments:

Tiziana Faitini presents a working paper on 'Shaping the Profession. Some Thoughts on the Moral Problematization of Professional Activities in the Counter-Reformation'

This paper investigates the theorisation of the duties belonging to different – lay and professional – conditions, elaborated upon by post-Tridentine moral theology, in order to contribute to the genealogy of the modern concept and experience of the profession, and, more generally, to modern economic and political rationality. It focuses particularly on how work and professional activities are dealt with in Juan Azor’s Institutiones morales, Hermann Busenbaum’s Medulla theologiae moralis and Alfonso de Liguori’s Theologia moralis, between the early 17th and mid-18th Centuries. After an introduction on the rationale of the research (§1), and some quick historical remarks on the sources and the theological elaboration on the states of life (§2), the paper examines the specific prescriptions imposed by these sources on professional activities in their discussions of the Third Commandment, and the obligations to rest and fast on certain days (§3). A brief analysis of the paragraphs explicitly devoted to the duties of professionals (law and health professionals in particular) (§4) precedes some final observations about the post-Tridentine model of profession, and its influence on the moral and socio-political valorisation of professional activities (§5).
Posted by Unknown at 13:19 No comments:

Congratulations to Prof. Dr. Mieth on his Goldene Promotion 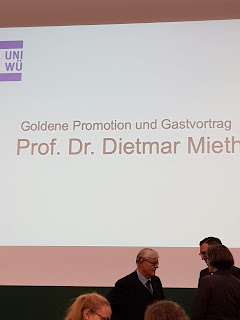 This week we celebrated Prof. Dr. Dietmar Mieths 50th anniversary of his doctorate. The event took place at the catholic faculty of the University of Würzburg - the place where Dietmar Mieth received his doctorate 50 years ago.
The celebrating was accompanied by a guest lecture held by Dietmar Mieth on Meister Eckharts thoughts as a theologist.

Giulia Pedrucci gives a working paper on 'Breastfeeding “in Couple:”Interpretations of Votive Statuettes from Ancient Latium and Southern Etruria of a Breastfeeding Woman with a Man and of Two Women Breastfeeding'

This article investigates an uncommon type of ex-voto that represents a breastfeeding woman with a man or two women breastfeeding. This type of statuette has been found only in ancient Latium and Southern Italy and has never been studied in its entirety. Taking into consideration a number of variables (mothering; biological link; social status; cultural aspects; place of provenance [urban and non-urban spaces]; public or private spheres; kind of deities and, if applicable, rituals performed to honor them; other kinds of votives), the article will attempt to reconstruct the performance of religious practices that involved the offering of these votives. It is argued that offspring were at the core of family life in an extended way and that these votive items were used by family members –– not only the mother –– to communicate with religious entities about issues concerning infants and their wellness. In this regard, breastfeeding is crucial.
Posted by Unknown at 13:56 No comments:

Tullio Viola is going to present a working paper on 'Articulate Reason and Its Elusive Background. Notes on the Late Royce’s Reading of Peirce'

This article is my contribution to a collection of papers on Hans Joas’s book Die Macht des Heiligen which is currently being edited by Bettina Hollstein, Matthias Jung, Wolfgang Knöbl and Magnus Schlette (forthcoming 2019). I take my cue from the second Chapter of Joas’s book, which examines the philosophy of religion of William James against the backdrop of Josiah Royce’s semiotic criticism of it. I then focus in particular on the source of Royce’s semiotic insights, namely Charles S. Peirce. My overall claim is that, while Royce succeeds in bringing to the fore Peirce’s sophisticated understanding of reason as an interpretive and semiotic faculty, it fails to do full justice to Peirce’s remarks about what we might call the inarticulate and experiential ground out of which articulation unfolds. I try to draw some implications from this reading that touch both on Joas’s interpretation of Royce and on the more general question of the relation between experience and articulation from a pragmatist angle.
Posted by Unknown at 15:23 No comments: